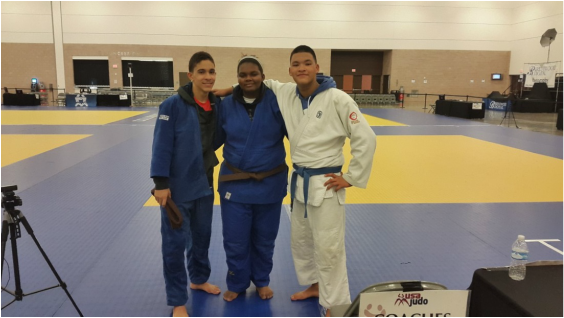 For the first time in T&T judo history we won a gold medal at international competition outside of the Caribbean, at any level. Today, 26th July 2016, at the USA Judo Junior Olympics, in Dallas, Texas, Luke WALKER defeated a tough Nicholas NELSON of USA to win the Boys Under 18 years (Cadet) up to 66kg. He won his 1st match with a choke and his 2nd with a pin.

His teammates Gabriella WOOD  (Junior Female over 78kg) and Xavier JONES (Cadet Male up to 90kg) managed to get bronze medals for T&T in their hard fought battles against the USA, Croatia and Mexico. Xavier in particular gave his best against top notch black belt opposition from the USA and Mexico who were much more competition experienced than he. He was the youngest and this 15 year old surpassed my expectations against this field of black belts.

This was a reverse in fortunes for T&T's "Junior Powerhouse Trio" where Jones and Wood usually take the headlines with 2nd and 3rd place finishes. On this occasion, Walker's first placing at international competition was 1st! Gabby lost to her nemesis from Croatia

Luke's milestone achievement follows on the heels of Christopher George's historic qualification for the Olympics in Rio 2016. T&T's Junior Judo team continues to make us proud by keeping our flag flying on the podiums of international judo tournaments.